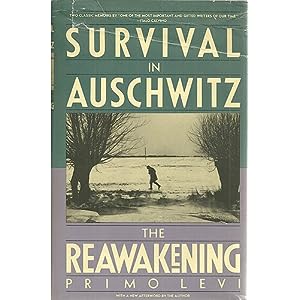 The Reawakening begins in January of 1945 after the Germans rapidly evacuated Auschwitz and drove the remaining 20,000 prisoners to the west, continuing to enslave any man fit to work, and sending the others to their deaths.  They left behind only the sick and dying in infirmaries.  Primo Levi with fortuitous timing had been recuperating from Scarlet Fever, and was abandoned with the rest of the invalids. They were left alive only because of the haste of the Germans’ departure.  So begins the interwoven stories and character studies of souls emerging.  In his first book, Surviving in Auschwitz, the “older brother” of the two, Primo Levi bears witness to how struggling to stay alive takes precedence, in any given moment, over what would have been the moral code of community or individuals. The extra bit of bread that could be earned, traded and finally shared, becomes a measure of humanity saved and restored.

This map below traces the route of Primo Levi and his fellow Italian survivors of Auschwitz, after their liberation by members of the Russian Army in January of 1945. They were taken through Eastern Europe, north into the USSR, almost to Minsk, then south through Romania, and then finally west, back through Europe to Levi’s home Turin Italy in an anguish filled journey of 9 months.

This map is from a website of a film, based on Primo Levi’s The Truce produced and directed by Davide Ferrario, 2007.

Primo Levi was 24 years old when, after joining an untrained band of the Italian Resistance, he was captured by the Fascist Militia in Italy. He admitted to being Jewish, and was taken to Auschwitz in February of 1944. Of 650 Italian Jews, only 24 survived and Levi speaks of only three who returned to Italy in this journey home.  In these two books, that are really inseparable, Primo Levi tells of the “ferocious memories” of this 20 month period of his life.  He was relatively healthy and educated at the University of Turin in Chemistry, so he was sent to the labor camp, “the Lager” or warehouse.  Months pass of hard labor and of emptying the debasing waste buckets. The hellish conditions have him and the others pushing, pulling and lifting while starving and almost sleepless.  The Polish word that haunts him for decades is “Wstawach”! Wake Up! They must labor in shoes that are mismatched, of wooden bottoms with sore-inflaming fittings, padded against raw skin only by pieces of rags which are procured by trading precious bits of bread. Levi is elevated to working in the rubber factory by the grace of his still being able to pass a grueling oral exam of his chemistry background.  He credits his survival to this change that came only months before the liberation.

These stories of camp life and death are told in Primo Levi’s first book, If This is a Man, which was published in 1947.  It was re-published to a tremendously wider audience in 1958, after it was translated by the American publisher with the title, Survival in Auschwitz.

Survival in Auschwitz details the depraved methodology of dehumanizing each person. In transport, deprived of water, parched parents had to stand holding children for hours, and could not allow their dehydrated children to drink from the faucet which only torturously dripped putrid, disease ridden water.  It continued in the sadistic removal of all dignity and humanity as it removed clothing, shoes, hair, and name.  Family, parents, women and children were stripped away never to be seen again.  Levi recounts these soul-shattering moments with quiet eloquence and sometimes poetic elucidation.  Levi said that he reports; he does not judge.  He is secular in his approach, and G-d doesn’t enter into the discussion.  He calls upon reason and living by ones ingenuity and soul-challenging decisions that without “EXTREME SITUATIONS” would have a different “moral yardstick.”   Why didn’t people rise up and rebel?  Rebellion requires hope and some physical strength.  Why didn’t people try to escape?  Who could be missing from the morning and night roll calls if for every one missing, ten would be shot randomly and on the spot.  Torture, physical and mental, is perpetrated every minute of existence.

Primo Levi had originally titled this book, The Truce. He refers to this time of wandering as the “parenthesis” in this journey; the time between Auschwitz and “Trials” of conscience upon arrival home. Decades of rumination internal and external, of survivor’s guilt takes its toll. Subsequent discussion would put this in terms of the latency period in a Freudian approach, (Jonathan Druker).  Stages of Post- Traumatic Stress Disorder are reflected in works and through his character studies.  At the end of the book Levi answers 8 questions that are always brought up and may point to the impossible or insufficient answers in both books.

At the end of both books there are identical notes from the publisher “About the Author.” The last sentence in each is, ”He died in 1987.” He was 68. Immediately, more questions swirl off these pages.  On searches there are books and articles that contemplate whether it was indeed a suicide from a 3rd floor staircase in his life-long home, or whether it might have been an accident?  After extreme situations, can a person “return” or “recover” and re-enter a “normal” life?  The idea that he may have survived in place of another, he calls “monstrous,” but he does survive to bear witness.  He enables us to as he implores, “Tell it.”